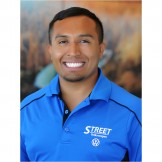 David Meraz is the Advertising Director for the Street Automotive Group in Amarillo, Texas. He graduated from West Texas A&M University in 2011 earning a Bachelor’s Degree in Mass Communication-Advertising & Public Relations.

As the Advertising Director for the Street Automotive Group it is his job to be ahead of the curve and find new ways to stand out in a multi-billion dollar industry. His vast knowledge along with his growing relationships with radio stations, television stations, newspapers, advertising agencies and several non-profits is a key factor for the success of Street Automotive Group.

Some of his favorite getaways are in Mexico, Spain and anywhere northeast in the U.S. David loves to run and is often seen throughout the community volunteering at different organizations such as the Maverick’s Boys and Girls Club or United Way. He is a Board Member for the WT Communication Alumni Network and the American Advertising Federation-Amarillo Chapter.