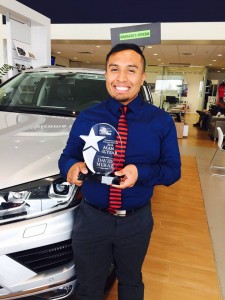 David Meraz, Adverting Director at Street Automotive Group was named the 2016 Hispanic Man of the Year at Hispanic Heritage Luncheon in Amarillo, Texas.

Amarillo, Texas, October 14, 2016 (Newswire.com) - David Meraz, Advertising Director for the Street Automotive Group was named as the 2016 Hispanic Man of the Year Wednesday, October 12, 2016 at the Hispanic Heritage Luncheon. The event was being hosted by the Amarillo Hispanic Chamber of Commerce and Los Barrios de Amarillo.

“It’s an honor to have been chosen to represent this community,” Meraz said. “I really couldn’t believe it when I found out and still can’t believe it.”

The Hispanic Man of the Year Award goes to an individual who has gone the extra mile in making a difference in the community. He does not hesitate to volunteer and will be one of the first to help his community.

“We are extremely proud of David,” Mike Good, General Manager at Street Toyota said. “He is a true ambassador of our company out in our community and a great example of someone who strives to have a servant’s heart.”

“It’s a great feeling to know that my hard work has been noticed and that I am making a difference in my community, especially the Hispanic community,” Meraz said. “I have to say that this wouldn’t be possible without the support of the Street Auto Group, managers and my co-workers.”

David Meraz was the 2015 Loaned Executive of the Year recipient and is heavily involved with United Way and many other non-profit organizations in the community. He is a winner of the 2016 Top 20 Under 40 Award with the Amarillo Chamber of Commerce and a recipient of the 2016 Rising Star Award from the Communication Department at West Texas A&M University.