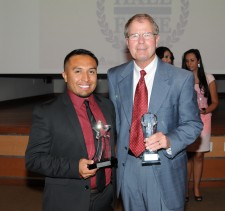 The Community Partner Award goes to a company or organization in the Amarillo community that has supported the department in several ways. Street Toyota has generously provided a Toyota Tundra to the Broadcasting Department for several years now so that the radio station, KWTS can haul around their equipment. Street Toyota is also a corporate sponsor of the Communication Alumni Network. Street Toyota has hired interns from the program for several years. Accepting the Community Partner Award were Joe Street, owner of the Street Toyota and his wife, Laura Street, President of the Amarillo Symphony Board.

“We are so fortunate of the great partnership we have with WT and the Communication Department,” Joe Street, Owner of Street Toyota said. “On behalf of the 200 employees we have, thank you and we appreciate this great award.”

The 2016 Rising Star Award goes to an alum who graduated as an undergraduate or as a graduate student from either the WTAMU Communication Studies Program or the WTAMU Mass Communication Program. The alum must have graduated in 2011 or before that date. The recipient must be actively involved in the community where he or she lives. The alum must also have made a substantial contribution in their professional specialty.

David Meraz graduated from WTAMU in 2011 with a degree in Mass Communication, an emphasis in Advertising and Public Relations. While attending WT, Meraz was involved with Residential Living as a Resident Assistant, he was a winner of an essay contest that rewarded him with a trip to Poland for 10 days, held the position of a senator for the College of Fine Arts and Humanities in Student Government and he wrote for the campus newspaper, The Prairie and he was editor of The Eternal Flame. Meraz was also a member of the Ad/PR Society and the National Broadcasting Society.

After graduating from WT, Meraz obtained a job with Street Toyota and eventually with Street Volkswagen. He is now the Advertising Director for the Street Automotive Group. He is involved with his community and was named Loaned Executive of the Year with United Way of Amarillo and Canyon earlier this year. Earlier this month he was named as Hispanic Man of the Year by the Amarillo Hispanic Chamber of Commerce and Los Barrios de Amarillo. He also received the Top 20 Under 40 Young Professionals Award by the Amarillo Chamber of Commerce.

“Congratulations to David Meraz,” Mike Good, General Manager at Street Toyota said. “He is an example of an outstanding alumni and employee. He is constantly serving the community and going above and beyond in his role at Street. He has made us all extremely proud.