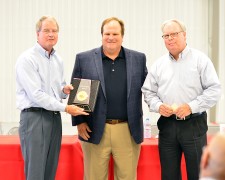 Amarillo, Texas, September 15, 2016 (Newswire.com) - Street Toyota of Amarillo, Texas received the Toyota President’s Award for the tenth time out of the last 11 years. Employees celebrated their triumph with a special lunch on Wednesday, September 14, 2016 at the dealership.

“Our employees work so hard all year and this award is proof of it,” Mike Good, Street Toyota General Manager said. “Receiving the Toyota President’s Award is a big honor because it recognizes our dealership and our employees for the work they all do.”

“All the employees are thrilled and excited about our success,” Laverne Davis, Customer Relations Manager said. “Our employees feel like they are valued and it creates comradery amongst us.”

In addition to the lunch for all Street Toyota employees, the dealership will also be receiving a name badge recognition at all dealer events, national recognition in an Automotive News advertisement and a year plaque to add to their President’s Award Tiffany crystal trophy located in the lobby of the dealership.