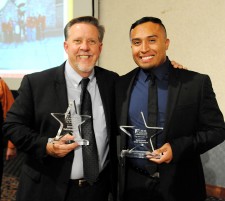 Amarillo, Texas, October 22, 2016 (Newswire.com) - David Meraz, Advertising Director for the Street Automotive Group was named one of the 2016 Top 20 Under 40 Young Professionals at the Annual Amarillo Chamber of Commerce Business Excellence Awards Dinner on Thursday, October 20, 2016. Street Volkswagen of Amarillo was also honored as one of the 2016 Top Businesses in Amarillo.

“Being named as one of the 2016 Top 20 Under 40 Young Professionals in Amarillo is a remarkable honor,” Meraz said. “I am blessed to be able to do what I do and I would like to thank everyone at the Street Automotive Group for allowing me to do it all.”

The Top 20 Under 40 Award goes to 20 individuals who are under the age of 40 and have demonstrated a high work ethic and are leaders in their fields. The individuals must be employed with an Amarillo area company for at least three consecutive years, reside within 30 miles of Amarillo and display a commitment to Amarillo through community service.

“We are extremely proud of David and everything he has done here at Street and throughout the community,” John Luciano, General Manager at Street Volkswagen said.

The 2016 Top Business Award goes to companies in Amarillo that are for-profit for at least 4 years as of July 29, 2016, be headquartered in Amarillo, have no more than 150 employees, have a growing success in Amarillo’s business community, exhibit commitment to good business practices, community relations and employee relations and have either an innovative service or product to ensure future growth.

“We’d like to thank the community for trusting us and for doing business with us,” Luciano said. “We are all honored and thankful for this award and our employees are one of the main reasons we continue to be successful.”

David Meraz was the 2015 Loaned Executive of the Year recipient and is heavily involved with United Way and many other non-profit organizations in the community. He was recently named Hispanic Man of the Year by the Amarillo Hispanic Chamber of Commerce and Los Barrios de Amarillo, he is a recipient of the 2016 Rising Star Award from the Communication Department at West Texas A&M University.