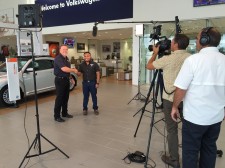 Amarillo, Texas, September 13, 2016 (Newswire.com) - Street Volkswagen of Amarillo will be honored at the Amarillo Chamber of Commerce Business Excellence Awards Ceremony with two awards on Thursday, October 20, 2016. The company has received the 2016 Top Business Award and David Meraz, Marketing & PR Manager at Street, was named as one of Amarillo’s Top 20 Under 40 Young Professional recipients.

“We are extremely honored to have been nominated and to have won this coveted award by the Amarillo Chamber of Commerce,” John Luciano, General Manager at Street Volkswagen said. “This award is a true testament to how we do business and to how hard our employees work.”

The company had to pass a rigorous inspection by board members of the chamber once they were nominated to qualify as winners. This award is given to nominated companies in Amarillo that have been open at least four years as of July 29, 2016, located in Amarillo, have no more than 150 full-time and part-time employees, have growing success in Amarillo’s business community, exhibit a commitment to good business practices, community relations and employee relations and have either an innovative service or product to ensure future growth.

“The company is very proud of David Meraz for his hard work and award,” Luciano said. “His hard work has been noticed throughout the community. He was the recipient of the 2015 United Way of Amarillo Loaned Executive of the Year for Excellence Award earlier this year and will receive the Rising Star Award from the WTAMU's Communication Department during their Hall of Fame Banquet later this October.”

Criteria for the Top 20 Under 40 Young Professional Award includes being under the age of 40 as of July 29, 2016, employed in the Amarillo area for at least three years, have demonstrated professional excellence in their career, brought value to the Amarillo business community, displayed a commitment to Amarillo through community service, and submitted a completed application to the board members at the Amarillo Chamber of Commerce.