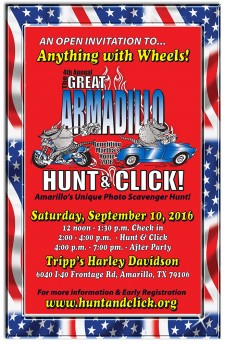 Amarillo, Texas, July 1, 2016 (Newswire.com) - Street Volkswagen of Amarillo will sponsor the ever popular Great Armadillo Hunt & Click charity fund raiser to benefit Martha’s Home, a homeless shelter for women.  “This is the fourth year that we’ve conducted the Hunt & Click,” says Zabrina Mireles, Marketing Assistant at Martha’s Home.  “It’s a lot of fun and each year we keep getting more participation from the community,” she says.  This year marks the first year that automobiles, or any vehicle on wheels will be allowed.  Previously, the event was exclusively for motorcycles.

The Hunt & Click is a scavenger hunt group activity where participants travel to various locations around Amarillo and take a photo at each stop.  The goal for participants is to visit as many locations as possible over a two-hour period.  Each photo is worth points and whoever gathers the highest score will be crowned as the Grand Champion in both a motorcycle and automobile category.

“We’re proud to support all of the great things Martha’s Home is doing in our community,” says John Luciano, General Manager of Street Volkswagen.  “Martha’s home empowers women to be their best and we support their efforts,” he says.

This year’s event will be held Saturday, September 10th, 2016 and check in starts at 12:00 pm to 1:30 pm at Tripp’s Harley Davidson.  Tickets are $30 for drivers and $10 for each passenger.  Tripp’s will feature an After Party from 4:00 pm to 7:00 pm that evening.  The party will feature entertainment by Moon Dog Band.  Complimentary food and drinks will be served.  Raffle tickets for assorted prizes will be offered and awards for the Hunt & Click winners will be presented.

Check out some highlights from previous year's Hunt & Click events on the official event website at http://www.huntandclick.org/  For more information call Zabrina Mireles at (806) 220-8810 or email her at zmireles1210@yahoo.com.